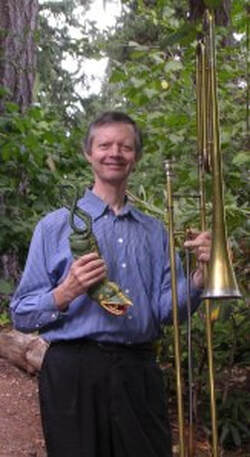 Phil Neuman, a performer on recorder, sackbutt, and numerous other wind and stringed instruments, co-founded and co-directs the Oregon Renaissance Band, which has performed for the Regensburg Early Music Festival, and recorded the CDs Carnevale and Now Make We Joye. He has produced and recorded seven CDs for Pandourion Records, including French Music of the 14th Century, Music of the Ancient Greeks, and The One Horse Open Sleigh. He appears in the award-winning film 'Buddymoon' directed by Alex Simmons, and recorded music on ancient instruments for the recent remake of 'Ben-Hur.' He has written and recorded music for Oregon Public Broadcasting. He has played for audiences on three continents, including performances at several ancient theatre sites in Greece.

He teaches Recorder, Renaissance Winds, and Loud Band classes at the Community Music Center in Portland. Phil is a member of The Trail Band, has performed under the direction of Christopher Hogwood and Nicholas McGeegan, recorded with the American Bach Soloists, and has played in the Philharmonia Baroque Orchestra, The Chicago Chorale, and the Handel and Haydn Society Orchestra. He has composed, arranged, and transcribed over a thousand works for recorder ensemble, brass ensemble, and symphonic wind ensemble, including 'Theme and Variations' that won first place in the San Francisco Recorder Composition Competition. He has built with his wife Gayle over 400 early wind and stringed instruments including krummhorns, cornamusen, douçaines and racketts.