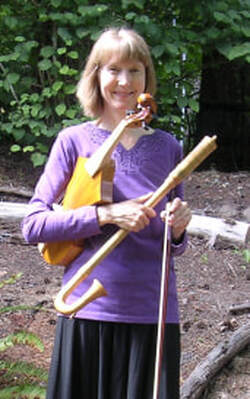 Gayle Stuwe Neuman, a performer on violin, recorder, sackbutt, and many other instruments, is also a vocalist who has received international acclaim for her renditions of the “Song of Seikilos,” the “Chorus from Orestes,” and others upon the release of Ensemble De Organographia’s CD Music of the Ancient Greeks. Several of the tracks from that recording have also appeared in the Norton Scores Recorded Anthology of Western Music, and numerous films and television programs. She appears in the award-winning film “Buddymoon” directed by Alex Simmons, and recorded music that is heard in the recent remake of Ben-Hur. She composed and arranged music for the 2015 production of “Mary Stuart” for Northwest Classical Theatre. She has performed for audiences in the U.S., Japan, Israel, Turkey, Greece, Canada, Norway, Germany, and for members of the royal family in Jordan. She co-founded and co-directs the Oregon Renaissance Band, now in its 27th season. Gayle is a member of the Trail Band and has played under the baton of Monica Huggett and Ton Koopman. She teaches Recorder, Collegium Musicum, and Renaissance Song classes at Portland’s Community Music Center. She has given workshops and presentations at many institutions, including Oberlin Conservatory, Rice University, Cleveland Museum of Art, and the Getty Center. She has built with her husband Phil over 400 early wind and stringed instruments including krummhorns, cornamusen, racketts, and vielles.